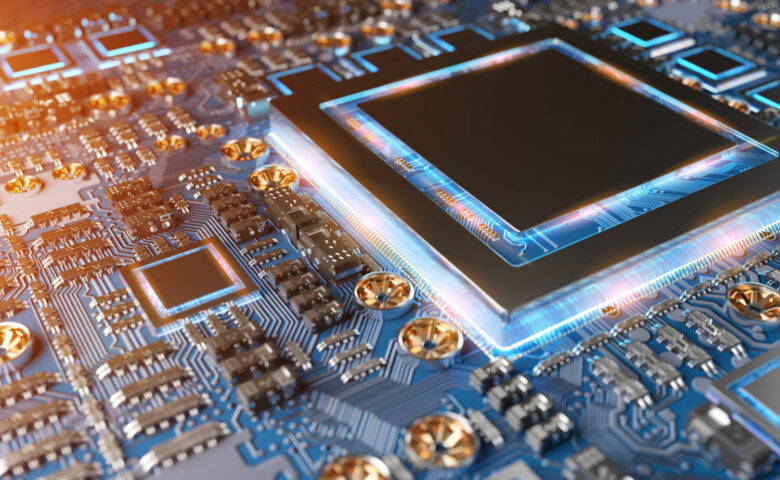 The new Ryzen 3000 series CPUs have hit the market, with Ryzen 9 3900X serving as AMD’s flagship processor. With its 12 cores and 24 threads, this processor directly competes with Intel 9900X.

As it offers extra cores for less money than the 9900X, this processor quickly found its place in many high-end rigs. Compared to the predecessor 14nm chips, the upgraded 7nm chip has more cores, better performance, and power-saving capabilities. 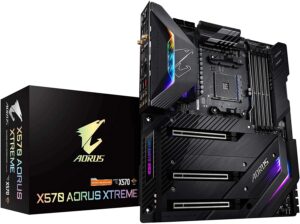 We have reviewed some of the best motherboards for Ryzen 9 3900X, but this one takes the crown. With the best VRM on the market, a fanless cooling solution, and plenty of connectivity and expandability options, this board is the top pick for those who want the best of the best.

Xtreme comes with the best power delivery system on the market. The 16-phase Infineon Digital VRM is super robust, and it can deliver a staggering 70 Amps of power!

Xtreme is the most popular overclocking board for the Ryzen lineup, and if you invest in a good CPU cooler, you will be able to achieve some impressive clock speeds.

While those fans are small and pretty quiet, they produce a distinct high-pitched noise that may annoy some users. Gigabyte has solved this problem by making a giant heatsink that covers the whole motherboard.

Thanks to the X570 chipset, this motherboard has full PCIe 4.0 support.

Unlike the B550, it can run multiple PCI lanes at full speed. AORUS Xtreme is all about expandability. It houses three PCIe slots, as well as three M.2 slots, offering you flexible storage options.

Four DIIM slots support up to 128 GB of memory. 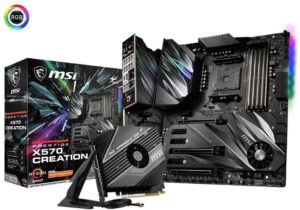 If AORUS Xtreme is out of reach for you, but you still want an enthusiast-level motherboard with all of the latest features, you should consider going with the MSI Prestige X570 Creation.

The 16-phase power delivery system is one of the best on the market. It utilizes the DrMOS MOSFETs, which deliver more power and accurate timings.

Audio quality is exceptional, thanks to the ALC1220 codec. The sound card is electrically isolated from the rest of the board, delivering a noise-free listening experience.

For the ethernet controller, they chose the Aquantias 10Gbit. This controller is usually found only on select few flagship motherboards.

There is also an additional gigabit controller for legacy purposes. In the box, you will also find a wireless antenna and an M.2 Xpander-Z card. This expansion card gives you four additional M.2 slots, as this motherboard has no M.2 slots.

This model has the most USB ports we have ever seen on a motherboard – 14 of them in total!

The cooling solution is one of the best on the market. The VRM and M.2 slots are kept cool with the help of heatsinks. The chipset is kept cool by a quiet fan. 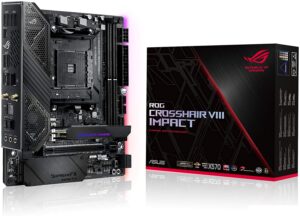 Going with a smaller form factor motherboard usually means lots of sacrifices in terms of expandability and features, as there is not enough space to put all the necessary ports and chips.

But Asus came up with an interesting solution for this problem and released this high-end feature-packed mini-DTX board.

Crosshair VIII Impact is one of the few boards on the market with an X570 chipset onboard, as it requires a comprehensive cooling solution and more space than the B550 or B450.

With a small form factor in mind, its 10-phase power delivery is exceptional, enabling you to have stable overclocking sessions.

At first glance, there is only one PCI-e port visible. But there is another PCI-e x4 port, covered by the SupremeFX soundcard. This chip is modular, and it can be upgraded in the future or swapped out for some other expansion card.

Two M.2 slots are found in the expansion card, included with this motherboard. Connectivity is exceptional, with WiFi 6 and Bluetooth support.

We also liked the addition of Control Card IV, which gives you some useful diagnostic tools. It will show you the POST code, which can be useful if you encounter boot/post problems.

BIOS Flashback lets you upgrade to the latest BIOS with USB. There is also a button for Clear CMOS. 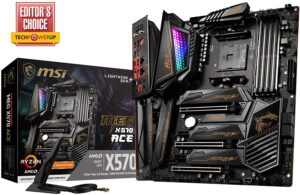 This enthusiast-level motherboard is a great choice for users who want a more affordable flagship board.

It offers plenty of overclocking capabilities and features. Its 14-phase power delivery system will effortlessly power any CPU you throw at it. For easier overclocking, they put a knob on the motherboard, which increases CPU frequency.

There are also plenty of options within the BIOS.

Keeping your temperatures in check is a must if you want to avoid thermal throttling. There are seven temperature sensors spread along with the motherboard, enabling you to identify potential hotspots within the case.

Ace has an advanced cooling system; a heat pipe running throughout the motherboard, connecting all the heatsinks and enabling the heat to spread evenly.

There are onboard power and reset buttons, which is always a welcome addition. But next to them, there is an unlabeled knob. We have found out that it is used for overclocking, you turn it up to get a higher clock speed.

Back I/O has everything you’d expect from an enthusiast-level motherboard; plenty of USB 3.2 ports, type C port, digital out, and diagnostic buttons. 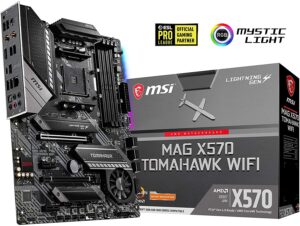 This all-black motherboard targets the mid-range segment. With its affordable price and a lot of connectivity options, it quickly found its place in many gaming builds.

Since this is an X570 based board, an advanced cooling solution is needed. Chipset is kept cool with a quiet Frozr heatsink. Thanks to its double-bearing design, it operates quietly even in higher RPM modes.

This motherboard comes equipped with a 12-phase power delivery system, usually reserved for more expensive, higher-end motherboards boards. Thanks to its powerful VRM, this motherboard has high overclocking potential.

Back I/O offers plenty of options. There are eight USB ports in total, and six of them are high speed. It has a 2.5Gbit ethernet controller, which is always a welcome addition for this budget segment.

If you prefer to go wireless, there is WiFi and Bluetooth support. 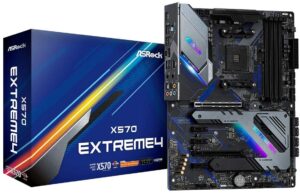 ASRock AM4/X570 Extreme4 is a mid-range motherboard that will let you dive into the world of X570 without spending top dollar.

This model features a preinstalled I/O shield, making this board super easy to install. It’s worth noting that the shield is made out of flexible plastic, making the job of fitting this board into a case that much easier.

The power delivery system is good, with a 10-phase VRM. Thanks to the 60 Amp choke, this motherboard will effortlessly power any CPU, and it can achieve some decent overclocking results. 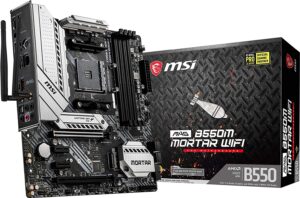 For those users who need a budget motherboard with advanced connectivity capabilities, the MSI MAG B550M Mortar WiFi could be a perfect choice.

We were surprised by the connectivity of this board. It has WiFi and Bluetooth support, and it even comes bundled with an external antenna. On top of that, it’s equipped with a 2.5Gbit ethernet controller, usually found on more expensive boards.

It comes equipped with a high-quality soundcard, which features surround sound capabilities and digital audio output. The main PCIe port is reinforced, useful if you plan to install a heavier GPU. 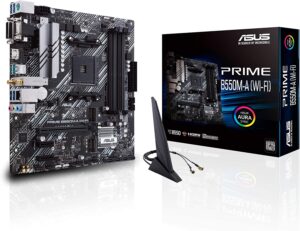 This micro-ATX motherboard is one of the most affordable options on the market. It supports Ryzen 5000 series CPUs, and it’s a great pick if you are on a tight budget.

It offers a variety of connectivity options. The Gigabit Ethernet controller is a bit outdated, but it will get the job done for most users. With the addition of WiFi and Bluetooth, there is also the option to go wireless.

It has a simple cooling solution, with aluminum heatsinks over the VRM and chipset. Four SATA ports and two M.2 slots give you plenty of storage flexibility. We liked the inclusion of LANGuard, a feature usually found on the TUF line of motherboards.

Not all sound cards are made equal. Since most motherboards support digital audio and surround sound inputs, it can get tricky to distinguish between average and high-end sound cards.

SupremeFX is one of the higher-end codecs, and it’s found on many mid-to-high level boards. Some enthusiast-level boards have integrated DACs and preamps, which will make a considerable difference if you are using high-end audio equipment.

Motherboards can be a bit tricky for new pc builders. Just because a motherboard has an AM4 socket does not mean it will support every AM4 socket processor. For example, all X470 based motherboards have the AM4 slot, but the X470 does not support AM4 socket Ryzen 5000 series CPUs.

There is a CPU support list for every motherboard, so make sure to check if your CPU is on that list before buying a motherboard.

Most motherboards on the market can support up to 128 GB of RAM, but not all of them support high-frequency speeds.

This is one of those areas where manufacturers are known to cheap out, especially on budget boards. If you get high-speed RAM and use it with a motherboard that doesn’t support it, your PC will still work fine, but you will be losing up to 50% of performance.

Always check the specifications to make sure your motherboards support the RAM speed of your sticks.

Having a motherboard with the latest ethernet controller can be a detrimental factor to your internet browsing experience.

If you have access to fiber-optic internet, and you end up getting a board with an outdated gigabit controller, you will be limited to a max 1Gbps transfer speed.

Most mid-range motherboards have at least a 2.5 Gbit controller, while some enthusiast-level boards have top-of-the-line controllers which support transfer speeds up to 10Gbps.

Which motherboard is best for Ryzen 9?

We have reviewed many AM4 boards and found out that the AORUS Xtreme offers the most features, best expandability and connectivity, and a breakthrough fanless cooling system. It comes with a hefty price tag though, so be prepared to pay top dollar for it.

Yes, the Ryzen 9 3900X will run all the latest games without any hiccups. With 12-cores and 24-threads, it has more power than any game can utilize, meaning you will be safe for another couple of years with this CPU.

While there are B550 motherboards that will support the Ryzen 9 3900X, we recommend going for an X570 board to get the most out of this high-end CPU. X570 chipset will offer you better-overclocking capabilities and more PCI lanes, while the B550 boards are better when paired with budget CPUs.

Ryzen 3900X has more cores and threads, but the 9900K has a higher boost speed. In gaming benchmarks, 9900K performs about 10% better. But upcoming games are expected to utilize more threads, making the 3900X a better choice for futureproofing.

Since Ryzen 9 3900X has 12 cores and 24 threads, there aren’t many applications that can utilize its full potential. Most games today can only use six cores at max; some games can use up to eight.

So it is safe to say that this is likely the most futureproof CPU on the market.

Ryzen 9 3900X is the most powerful chip in the Ryzen lineup, so it makes sense to pair it with a capable motherboard. While there are budget options for this chip, we recommend going with a higher-end board, as it will allow you to get the most out of this processor.

If these weren’t enough, feel free to take a look at these products from the same price range, that are available right now on Amazon: