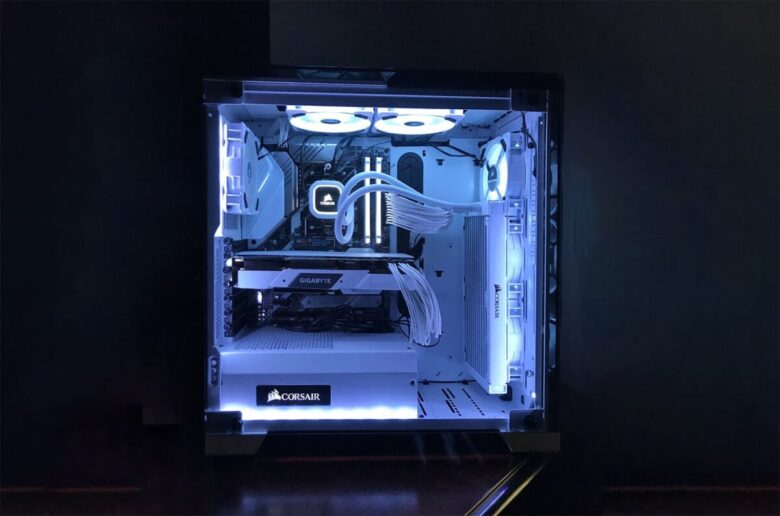 There are not many white motherboards on the market, especially ones that are still in stock. If you aren’t up-to-date with your tech news, then you might be surprised to find out that the prices of the components have been skyrocketing for more than a year.

But we’ve still managed to find and review some of the best white motherboards for your gaming build, so you can decide for yourself which one is the best for your needs and your budget. 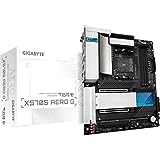 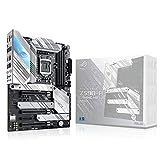 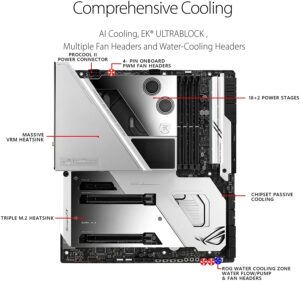 Asus released its most sophisticated motherboard to date, the ROG Maximus XIII. It offers all the latest and greatest features you could wish for, plenty of expandability options, and advanced connectivity features. There are two versions, Extreme and Extreme Glacial, and we will be reviewing the latter today.

The first thing that catches your eye is its massive cooler, complete with a shiny white finish. This monoblock is featured only on the Extreme Glacial model, and it covers the entire surface of the board, even the CPU. Asus calls it the Ultrablock, it is fully made out of copper, which means it provides maximal thermal conductivity.

This motherboard will remain ice-cold even during the most intense overclocking sessions thanks to the state-of-the-art cooling system. It comes with the most advanced power delivery system on the market, a 20-phase VRM that delivers up to staggering 100 Amps.

You will never run out of USB ports, as this model has ten available high-speed ports. Something you don’t see every day is Thunderbolt 4 support, and this model has two ports (with speeds up to 64 GB/s). 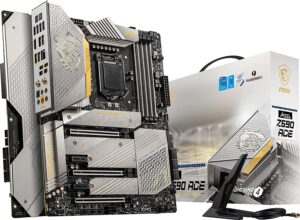 If the Extreme Glacial is out of reach to you, the MEG Z590 ACE Gold might be the perfect alternative. This enthusiast board will support all the 10th and 11th generation Intel processors, even the mighty i9 11900K. Based on the Z590 chipset, which gives you plenty of overclocking options and PCIe 4.0 support.

They went overboard with the design and delivered a beautiful white-and-gold motherboard. The crown jewel of this motherboard is the CNC milled etching of a dragon, located directly above the VRM. Aluminum heatsinks cover the VRM and the chipset. Even the RAM ports are aluminum plated for that final touch.

Although its VRM is weaker than the one found on the Extreme Glacial, you still get a capable 16+2 power delivery rated at impressive 90 amps. This makes this board perfect for overlocking, so don’t forget to pair it with a K version Intel chip.

We were disappointed that they didn’t include the 10Gbit ethernet controller found on the Extreme Glacial, but the reality is that the onboard 2.5Gbit controller will be more than plenty for most users. 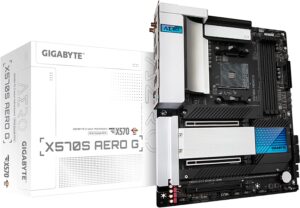 Gigabytes latest board is another fine high-end choice, offering plenty of connectivity options and a great cooling solution. Although the board itself is black, most of it is covered with glossy white aluminum plates. Pair it up with a white cooler, and you got yourself a great motherboard for white-themed builds.

Unlike the last two boards we’ve reviewed, this board is based on AMD’s latest X570S chipset. Pair it with a powerhouse such as the Ryzen 9 3950X, and you got yourself a futureproof system that will run all the latest games on the market.

X570S is an upgraded version of X570, and it’s currently the best chipset for the Ryzen lineup. Its 14-phase VRM makes it a more than capable overclocker.

There are plenty of connectivity options. If you decide to go wired, there is a 2.5 Gbit ethernet controller. The onboard WiFi card delivers high-speed wireless, and it also has Bluetooth support. 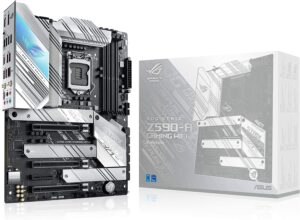 Another great choice for Intel-based builds is the ROG Strix Z590-A Gaming. Part of the gaming-oriented Republic of Gamers lineup, this motherboard will satisfy even the most demanding users.

Most of the surface is riddled with gray-whiteish plates that give this motherboard a bold and modern look. There’s an LED RGB panel just above the power delivery, which is fully customizable.

ROG Strix Z590-A Gaming is a capable overclocking board, as it sports a 14+2 VRM with Dr.Mos power stages. Its got three full-size PCIe slots, giving it plenty of expandability options.

They opted out for aluminum heatsinks all around the board, so you won’t have to worry about thermal throttling.

Since this is a gaming motherboard, it has all the latest connectivity features, so you don’t have to worry about lag while gaming. Its 2.5Gbit ethernet controller paired with a WiFi card, giving you plenty of flexibility, so it’s up to you if you want to go wired or wireless.

Enjoy high-fidelity audio thanks to the SupremeFX soundcard. With AI Noise cancelation, you won’t have to worry about outside noises disrupting your gaming teammates. 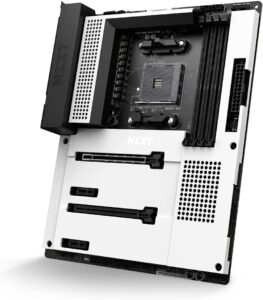 We’ve come to the more affordable board options, and NZXT N7 B550 is one of them. It competes in the mid-range segment and is one of the most popular choices for white-themed builds. It is a full ATX sized board, so make sure to get a nice tower case for it.

The bottom half of the board is fully covered with smooth white heatsinks, giving it its unique look. We were surprised by the decision to paint the VRM cover and the I/O black, but you can repaint them yourself if you like, some more advanced users customize their boards.

Since this is an AM4 based board, often paired with mid-range CPUs such as the Ryzen 5 3600.

Since this is a B550 based motherboard, there is no option for overclocking, but at least it has PCIe 4.0 support. NZXT was nice enough to pre-install the I/O shield, which makes the installation of this motherboard that much easier.

If you don’t mind going for a board with the previous generation Z490 chipset, then the ROG Strix Z490-A could be a viable pick. It is in the same price range as the B550 boards we’ve reviewed, but unlike the B550 chipset, the Z490 has overclocking capabilities.

If you don’t mind sacrificing the PCIe 4.0 support for an affordable overclocking board, this motherboard could be for you.

To get the most potential out of this board, we recommend pairing it with an i9 10900K. Its 12+2 phase power delivery is decent, and you will be able to squeeze a bit more power out of your CPU. This budget board is perfect for users who just want to get up and running. ASRock is the king of budget motherboards, and they always manage to cram in lots of features for little money.

ASRock AM4/X570 Steel Legend is a great entry-level choice, and it is perfect for users who want to build a white-themed build on a budget.

The first impressive feature is the X570 chipset, which is usually found on more expensive boards. So this board is nice if you want to get PCIe 4.0 support and overclocking capabilities on a budget.

Although it supports overclocking, its 10-phase power delivery is not on par with the task, so don’t expect to have any crazy overclocking sessions with this motherboard. 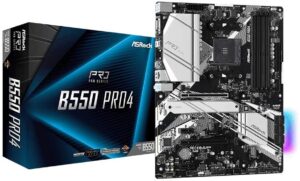 Not everyone needs an expensive motherboard. Although their abundance of latest features may be appealing, it comes with a hefty price. And the reality for most users is that extra money could’ve been spent on a better GPU or CPU. ASRock B550 PRO4 sports the B550 chipset, which may not be capable as Z590, but it will run every Ryzen chip you throw at it.

The reinforced PCIe slot is a nice addition, and it will allow you to install heavier GPUs. There is an additional PCIe slot, which is always a welcome addition on cheaper boards.

The back I/O is pretty basic, with gigabit ethernet and a three-port sound card. There is a single Type-C port, which is useful if you have a high-speed external hard drive.

As far as motherboards are concerned, most users know about the big four; Asus, Gigabyte, MSI, and ASRock. But there are other players on the market, such as the NZXT.

While all the manufacturers offer high-quality products, most users go with the known and tried brands, and we recommend you do the same.

If you are going with a high-end processor such as the Ryzen 9 3950X, it would be a waste to put it on a board with the B550 chipset, as you won’t be able to overclock it.

Z590 chipset is currently the best for Intel-based builds, and if you are going with Ryzen, consider the X570. Many budget chipsets don’t offer PCIe 4.0 support, so you should avoid them if you have a CPU that supports PCIe 4.0.

Every motherboard offers at least one option for connecting to the web. A few years back, all you needed was a simple gigabit ethernet, but fiber optics are becoming more available, so always consider the connectivity options before committing to the purchase.

Most motherboards feature at least a 2.5 Gbit controller, which will be plenty for most users. It’s also useful when the motherboard has an onboard wireless module, so always consider spending a bit more on WiFi-enabled models.

When trying to score the perfect motherboard for your next build, the first point you should establish is the budget. For those who are on the budget, entry-level boards provide a great alternative.

You will be able to put more money into the CPU and GPU. But we’ve seen too many builds with high-end components crammed on budget mini-ATX boards.

Plenty of users are going for a white-themed build, but unfortunately, manufacturers have only limited options. For unknown reasons, there are no full-white boards on the market.

What is a good white motherboard for gaming?

The best white motherboard on the market is Asus Rog Maximus XIII Extreme Glacial. It is one of the most expensive options on the market, but it is worth the money.

It offers a robust 20-phase power delivery system, plenty of connectivity options, and a water-cooling block.

Can u paint your motherboard?

Yes, you can, but you cant just dip it in a bucket of paint. The safest option is to take all the removable parts, mostly heatsinks, and use a can of spray paint that is meant for use on aluminum.

Plenty of users use the plastic dip, but we don’t like it, as it cracks after some time.

Can you paint PCBs?

Manufacturers do not recommend painting the surface of the board itself, although some users report success.

There is a high risk it will ruin the motherboard, so only consider painting removable parts, such as the heatsinks and M.2 covers.

While your options for getting white gaming motherboards are currently limited, we still found a few picks for every price range.

Higher-end boards will offer you more features and connectivity options, but they will set you back a lot more money. Budget boards can be a great entry point into the world of PCs, but they come with limited features and basic design.

If these weren’t enough, take a look at these products that are available right now on Amazon: