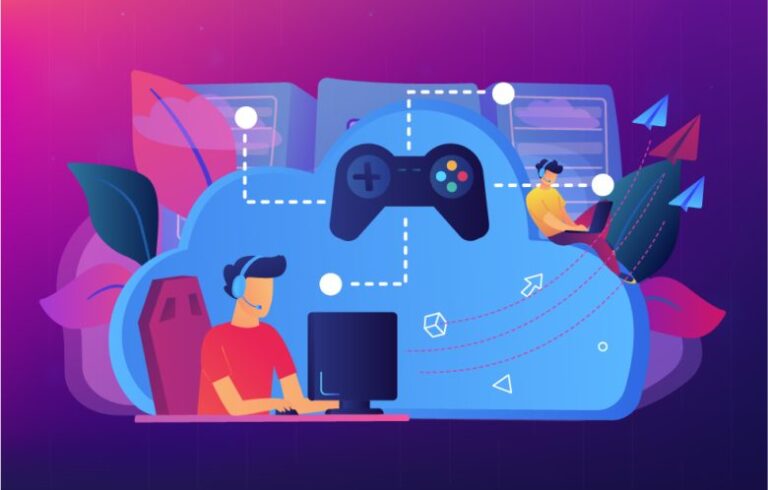 Gaming technology and cloud computing were almost incompatible a few years ago. It was primarily due to the non-existent infrastructure that would support heavy server loads. However, the new services show us that this is very possible. What is the significance of cloud computing in the gaming world? We will try to explain it in this text.

What Is Cloud Computing?

Cloud technology or cloud computing is a platform that treats applications and data as a service instead of a product – and that service is delivered over the Internet. The main advantage is that the data is not kept on one device, but in the cloud. So, what’s important to know is that you can access your data from any device, such as a smartphone, laptop, or tablet – and get the job done either online or offline. Cloud computing was very interesting for companies and small businesses. Namely, where the work is done outside the office and where more than one employee has data on the same computer, cloud computing is a necessary thing. Precisely because of the easier communication and exchange of information, the cloud proved to be a great solution. But what is its impact on the gaming industry?

We can say that cloud gaming has made an almost real little revolution in gaming. Today, if you want to play the latest hit games, you no longer need to have the most powerful hardware – phone, laptop, or computer, nor to buy games individually. All you have to do is subscribe to the desired gaming service and have a quality internet connection. This way, users of such services have access to a large number of video games without the use of a game console or additional, expensive PC hardware. Games are mostly selected from the cloud gaming catalog, which the operator provides you with game publishers and suppliers – and all you have to do is select the game you want to play from the catalog – and that’s it!

Do Cloud Services Impact The Gaming Industry And How?

New cloud services have the potential to completely change the gaming ecosystem. When it comes to the consumption of games – they probably won’t change significantly. However, for companies involved in game development, gaming hardware production, and game distribution – many things will change. Namely, they will have to adapt to the new business model or they will not survive. With cloud gaming, that is, streaming games – the hardware is no longer so relevant. The only thing important is to have enough stable connection – and you will be able to play any game on almost any device that has a screen. That includes almost everything – from a smartphone to a TV. All users have to do is connect to the platform – and they are already halfway to enjoying their favorite games. How to connect and what to do? You can click here, and find out everything you need to truly enjoy your favorite games via the cloud. The fact is that streaming platforms will further shape the gaming industry. In what way? Simply, the ability to play a PC or Console game on a mobile phone will affect the competitiveness of mobile games – and make it more difficult for game developers to be focused on mobile platforms. Also, game distribution platforms would become irrelevant with such features.

Benefits Of Using Clouds In The Gaming Industry

Cloud gaming eliminates piracy – which is also the biggest advantage that publishers want. On the other hand, gamers will not have to upgrade their hardware every now and then. That will be the responsibility of the company that runs the service. It will be enough just to have a “console” device that is in charge of receiving an encrypted video stream. Thus, using the cloud reduces the chances of unauthorized manipulation.

We could say that this platform is somewhat safer than other applications. This is primarily because it prevents any external influence, such as hacking. Cloud information is stored inside a virtual space. Data security is also reflected in the data backup mode. While with traditional hosting services the backup is done once or twice a day – the cloud service providers perform the backup after each change.

When we look back at the current, traditional model of games – we see that companies had to pay far more for good flow and traffic in the system. This was especially noticeable in situations where a new game title was thrown out. If you switch to the cloud, it works according to the pay as you go system. Then gaming companies have an obligation to pay only for those resources that have been used.

Compatibility With Devices Of Any Type

Since they use highly scalable platforms in the cloud – you can play the highest quality video games on lower-quality machines. Any limitations you have had so far, such as weaker memory or graphics, processor power, etc. – you can overcome this way. Therefore, newer, stronger games are available to almost everyone. Speaking of availability, it should be mentioned that the cloud also supports almost all mobile devices – such as phones, laptops, or tablets. This means that almost everyone can enjoy the games, no matter which device they use.

Cloud allows its users to access games from any device but also from anywhere – even without downloading apps. Also, players can play multiple games at the same time. Sure, gaming companies will have more traffic and far more profit from that – but players will have an incredible experience. It is this capability that makes the gaming industry even more dynamic as it actively connects gamers and service providers.

It is quite certain that the impact of cloud technology on the gaming industry is more than great. To some extent, it also has its challenges. Still, the benefits are far more visible. For starters, cloud gaming eliminates the need to drift the console. Players have quick access to games across a variety of devices – and computer hardware is no longer an obstacle to playing some more technically demanding games. That is why this small revolution has helped not only gamers –  but also game manufacturers to generate higher profits.