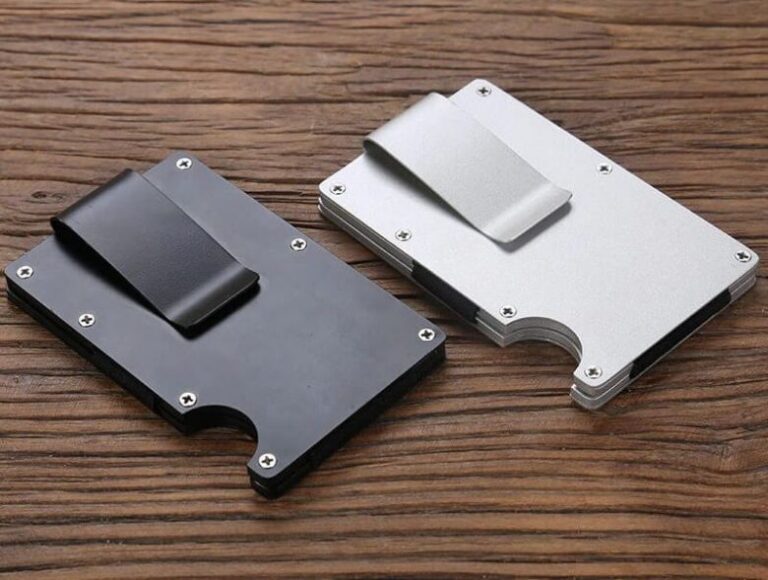 With the recent advent of RFID cards, people have started worrying about the security of the whole concept. Some companies were quick to realize this and started offering RFID blocking products, like wallets and sleeves.

How does RFID work

RFID or radio-frequency identification is a technology that allows transmission of data over short distances, using electromagnetism. The original use was for inventory tracking, allowing people to quickly get a readout on the entire warehouse, something that would previously take hours, if not days. Over time, other uses were found, so RFID chips or tags found their way into many other areas.

There are two main types of these tags, active and passive. Both types can both send and receive radio signals, the difference is that active ones have their own power source, usually a battery, while passive ones use the power of the transmitter to make their own transmissions.

The other half of the system is RFID readers. They are highly adaptable in terms of distance and zone they cover, making them ideal for asset protection and tracking.

After commerce and retails adopted RFID technology, it began spreading into security as well. It was used in identification badges, eliminating the need for swiping used by earlier magnetic stripe cards. Access control with RFID tags was made much simpler and more secure at the same time. Most modern garages used them to grant access to vehicles of their clients, without the need for manned entrance ramps. Another popular implementation is collecting tolls on highways.

In 1998, Malaysia became the first country to RFID chips in passports, effectively creating the first biometric passport in the world. Many countries soon followed suit. These passports have many advantages over traditional ones, as they make storing and retrieving data about the holder’s travel much easier and more convenient. Apart from the benefits, new passports raised come concerns also. The main one was the possibility of unauthorized access to the data contained in the passport, like personal information.

Around the same time Malaysia introduced their new passports, contactless payments become reality. Today, almost all major financial institutions are offering it to their customers. Unlike mobile payment systems like Google Pay or Apple Pay, which use NFC technology, contactless cards are using RFID chips.

Government-issued ID cards around the world are increasingly using RFID chips for the same reasons passports.

All this has left people wondering just how safe is this technology. Some vocal critics claim that the chances of illicit aches and data theft are very high, despite the safety measures like Basic Access Control (BAC) codes. According to them, all it is needed is an RFID reader located in a convenient spot to access data of thousands of people. Things get even more serious with contactless card payments. It just seems that the opportunities for criminal activities are too high, despite the obvious benefits.

They can be divided into two groups, active and passive. Passive RFID shield use various materials that can block or absorb RFID signals. Active protectors have chips in them that send out signals interfering with RFID readers and skewing the readings. They either send false data, fooling the reader or simply absorb enough power from the transmitter that it can read the card properly.

Passive shields work great for contactless payment cards since these operate at 13.56 MHz. these signals are fairly easy to block or absorb. However, ID cards and security passes work on 125 kHz frequency. This is a problem for passive protectors and the only effective way is to use active countermeasures. That is why some manufacturers developed RFID blocking cards. They are usually the same size and shape as payment cards, only thinner.

To work properly, they should be placed inside your wallet or cardholder, nest to your credit cards. The good news is that they work on both RFID and NFC cards, offering full protection. Blocking cards automatically detect and RFID scanners in the vicinity and send out a signal that blocks the access to your cards. They can even be placed inside your phone case if you are using a mobile payment system.

Do You Need RFID Blocking Card

Plenty of experts claim that RFID blocking cards and other equipment designed to protect you for RFID skimming are a waste of money for one simple reason. The incidence of RFID scams are so rare and far between that chances are very slim that it will happen to you. Furthermore, modern RFID cards use encrypted data, protecting the information they send and receive.

The amount of time and effort needed to crack these codes or commit an effective RFID crime simply doesn’t pay off. There are far easier ways for criminals to obtain stolen credit card information from various sources. Messing with RFID scanners simply isn’t worth it.

Even if some criminal elements decided to try and commit an RFID scam, that would involve sitting in one place for hours on a busy street, hoping that enough people with RFID cards pass by. In the modern world, where almost every inch of space in urban environments is covered by CCTV cameras, that seems like a sure way of police taking notice and coming to investigate.

That being said, blocking cards cost $10 to $20 on Amazon and they are virtually foolproof. Just stash them in your wallet and you don’t have to think about RFID scammers ever again. This is one of those instances when the investment is so small that it isn’t worth the risk not to make it, regardless of how low risk is in the first place. Why not buy some peace of mind, especially when it comes so cheap?