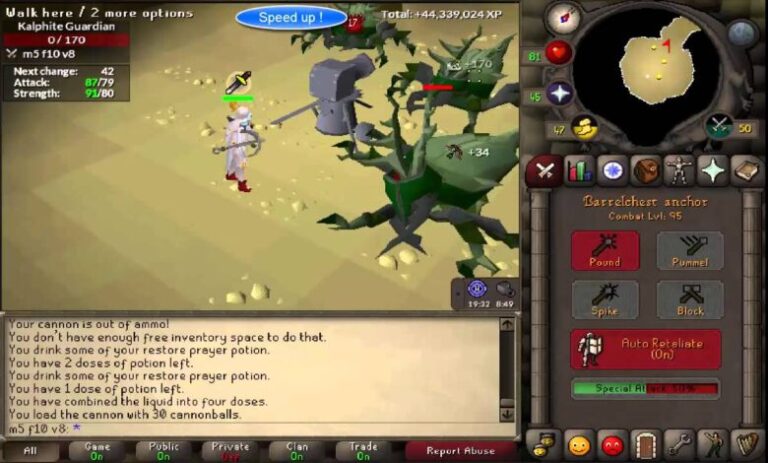 Cave to Island, Cove to Lair. Slayer Masters send you everywhere. In Runescape, Slayer is an expanse skill requiring you to kill a variety of creatures using various methods, tactics, utilizing all combat styles and armors as well as a fair amount of travel.

There are some ways to make the Slayer grind easier and more streamlined, some items that speed things up, and overall ways to keep things more efficient.

Let’s look at some convenience methods, tips, and tricks on the Slayer skill in Oldschool RuneScape. Whether you’re at the beginning of your Slayer journey or further into the grind, you should find something here to help you.

The Dwarf Multicannon is your best friend

After the completion of the Novice Quest, Dwarf Cannon; You gain access to the Dwarf Multicannon, an automatic spinning cannon that pulverizes many NPCs.

Not every task is ‘Cannonable.’ There are areas where a cannon cannot be placed and NPCs that withstand its firepower. For most tasks, though, the cannon is a useful tool in speeding up your assignment and making it more accessible in non-aggressive areas as your cannon will draw the creature to you.

The cannon is by no means a cheap method of training. The cannonballs you use drain reasonably quickly. Some of the best cannonable Slayer Tasks are the Dagannoths at the Lighthouse. Bloodvelds, Fire Giants and Hellhounds in Nieve’s Cave and the Kalphite Workers or Soldiers at the Desert Slayer Dungeon.

As an extra tip for cannons, when reloading your Dwarf Multicannon left-clicking and using the cannonballs on the cannon is a faster action than the usual left-click cannon.

Part of the Silver Jewelry update, Expeditious and Slaughter bracelets shifted the meta of slayer training. Utilized from level 1 to 99, these bracelets are a Slayer’s necessity!

Expeditious bracelets make your tasks faster to complete. Each bracelet has 30 charges until, ultimately, it disintegrates. The bracelet has a 25% chance to count a kill as two from your Slayer Assignment, using one charge on each successful activation. You will need approximately one charge per 5 kills of your assignment. So for a task of 150 creatures, one full Expeditious Bracelet will be used. These bracelets are best used for less efficient tasks, such as Hellhounds.

As you may have expected, a Bracelet of Slaughter acts oppositely, extending your Slayer Assignment. With 30 charges and a 25% chance, this bracelet counts one kill as zero from your assignment on activation. One charge will be used on average once every three assigned Slayer creatures. For a task of 180 Creatures, you would need two full bracelets.

Note that wearing a bracelet does, of course, take up your gloves slot. So you are sacrificing some stats for the ability to speed up or extend your task. Although these bracelets degrade, as they’re made with lower-tier Silver and gems, they’re relatively inexpensive for the considerable impact on the experience rates.

Ancient Magicks unlock a multitude of useful spells on their spellbook. One of the most used is ice and blood bursts. This is especially useful on Slayer Assignments.

In the past, bursting was only really an option for a couple of creatures. As not only does magic have to be effective, there also has to be enough spawns for bursting to be worth it, be multi combat, and for most people have item drops to mitigate the costs. Bursting can be quite expensive over time as you’re regularly using various runes and usually using prayer throughout the task. If you don’t quite have the gold for affording to burst, you could buy OSRS Gold from Chicks Gold for a head-start.

The Zeah Catacombs release, however, made bursting much more viable for multiple Slayer creatures that were not possible to burst before effectively. Most notably are the Nechryaels and Abyssal Demons. That’s right; you can burst Abyssal Demons now!

The beauty of bursting lies mostly in the number of targets you can hit at once. Instead of your usual one at a time combat, bursting effectively can attack up to nine targets at once in a 3×3 grid. If that doesn’t speed up your tasks, I don’t know what will!

The usual bursting method involves using darts to quickly attack nine targets and stack them in a small 3×3 grid. After that, switch to your staff and burst away. Defeat those 9, and lure more in again with darts. Simple really.

An extra tip for bursting, since you must be on Ancient Magicks to perform these spells, is if you happen to have an Explorer’s Ring 4, bring it with you. You can use this to high-alch drops from the Nechryaels and Abyssal Demons, reducing your banking trips and ensuring you get the most cash out of your tasks to afford the runes for bursting.

Kits such as Ornament, Recolours, and Upgrade Kits make your items untradeable. Due to this, they cost nothing to reclaim when you die. If you like to AFK Slayer life and die often, this is a money-saver for you.

You can use NPC contact to acquire a new Slayer Task from a couple of the Slayer Masters, saving you the trip. You will need to be on Lunars for this, though.

Level 88 Agility is the highest requirement for any Slayer related Agility shortcut. Having this will save you a lot of travel time and effort in the long run. Plus, Agility is good to have anyway.

As one of the most popular skills trained in the game, Slayer provides a foundation for the gameplay of many. Hopefully, you found some tips and tricks here to help you on your way to becoming a Slayer Master!