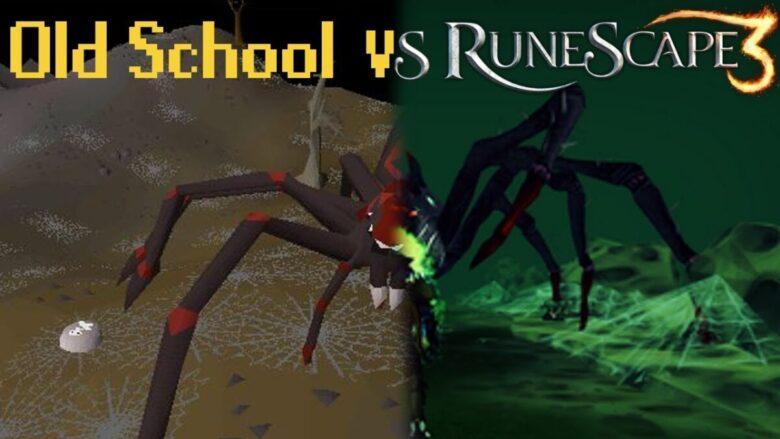 Runescape was originally released to the public on the 4th of January 2001. This is when the first version of Runescape was released, where the game was a lot more different than how we currently see it today. However, Runescape 3 was only known as “Runescape 3” after a very big, game-changing update called the “Evolution of Combat”.

This update was released to the public on the 20th of November 2012. It completely changed the combat mechanics and added a whole lot of brand-new features such as abilities, which were not in the game before. Runescape 3 had a sharp downwards slope of the player base as time went on after the Evolution of Combat update as most players decided that it simply was not the game they used to love and enjoy anymore.

The uniqueness of Runescape was thought to have faded away as it began to phase into any other typical MMO out there.

The Old School Runescape was originally released to the public on the 22nd of February 2013. The game was the original Runescape game in its 2007 form. This was released after popular demand and a petition to bring back the old version of the game to a point where it had provided peak entertainment and enjoyment to everyone.

Jagex decided to keep the game separate to Runescape 3 as that game still had a small active player base. Old School Runescape gained mass popularity very quickly and popular content creators on the YouTube platform such as KSI, Syndicate, and more, are creating videos based on the game.

This goes to show how well known the game truly was at its peak 2007 stage. Jagex had made their greatest ever business decision by reopening this version of the game again.

Players were flooding in, eager to relive their childhood favorite game with all their friends again. The release of Old School RuneScape Mobile on the 30th of October 2018 had also helped bring in a load of new players into the game.

As this was a mobile app, many people from the mobile community were newly introduced to the game, which was very good news for Jagex as their usual typical player base are people who have been playing for many years.

With RuneScape Mobile, they gained more attention and players are able to choose to play their favorite game on their computers or wherever they might be with their mobile devices.

So, why should you play Runescape 3? Although there will never be enough reasons to persuade someone to “like” a game, this is completely player preference, which someone else can never change. Here are some reasons that you may like to play Runescape 3.

Firstly, Runescape 3 follows the style of a lot of other MMO’s out there. This is through features like the combat mechanics, using attack abilities with your hotkeys. If you are someone who enjoys this type of playstyle, then Runescape 3 will be a good choice for a player like you.

Another reason why you may like Runescape 3 is that it is actually the original game, so if you were someone who had played the game many years ago, your progress and items would still be there. Many players do not wish to restart their progress and so they find it easy to just simply carry on playing Runescape 3.

You may also prefer RS3 as the game has more skills that are unique to the game compared to Old school Runescape.

For example, Runescape 3 contains skills such as the Divination or Invention skill, which Old school Runescape does not have. This can make the game more fun and interesting, especially for players who have already maxed out the other skills.

There are several reasons why you should play the Old school Runescape. Firstly, if you were a player who had played the game many years ago, back when it was originally in its 2007 form, you may find Old school Runescape very nostalgic, allowing you to relive your childhood.

The game is also getting reasonably updated in a way where it can keep its nostalgic form, while bringing out new, exciting updates.

For example, new bosses, items, and new lands are being released however it does not get rid of the “Old School” theme of the game. Another large reason that many people prefer Old school Runescape over RS3 is that Runescape 3 has a heavily inflated experience level injection.

Another reason many people choose Old school Runescape over RS3 is because of the large community there is. The player base is incredibly larger than RS3’s player base so there is more space to socialize with other players in the game. Content creators on YouTube also mostly play Old School Runescape, so you will naturally be given more guides, tutorials, and fun videos to watch, which may drive you towards playing Old School Runescape more compared to Runescape 3.

Overall, there are massive differences between Old School Runescape and Runescape 3, hence Jagex creating them as two separate games. The economy is also heavily different. This can be seen on Runescape gold sites like Probemas, where the price of RS3 gold is significantly lower than OSRS gold. This shows that there is a lot more gold in RS3 than there is in OSRS.

However, gold prices should not really be a reason for players to switch their game preference unless your main focus is to make real money.

In the end, no game is “better” than the other, but OSRS is definitely more played in the community and is down to your personal preference. We have curated a list of the best devices to run such progams/games. Read more at Tech Consumer Guide.