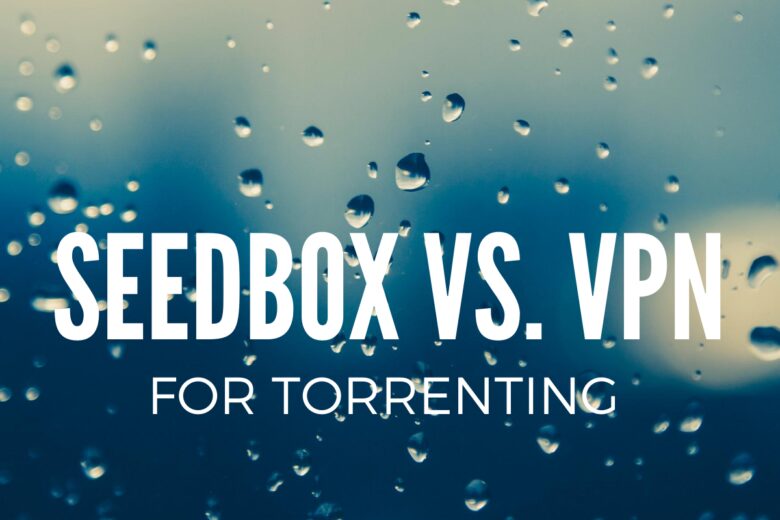 They are completely different things— created for different purposes.

But if you landed here, you are probably trying to find the difference between VPNs and Seedboxes regarding torrenting and privacy.

In a nutshell, a VPN will mask your public IP address and use a VPN’s server IP to torrent, so you wouldn’t get flagged by DMCA letters, your VPN provider will. A Seedbox is a server made especially for seeding torrents. Seedboxes are the next level in terms of torrenting privacy, speed, and experience.

VPNs or Virtual Private Networks refer to “the network” created by a client-server communication. VPNs were not originally created for what they are most commonly advertised today, as Internet security and privacy tools. Instead, VPNs were originally designed with the intention to “virtually” extend “private” networks to a distant geographical space. For example, if an office needed to extend a branch office to another country, a VPN would provide the encryption mechanisms to “safely” transfer data across public networks, such as the Internet.

VPNs need encryption from mechanisms like IPSec, SSL-VPN, OpenVPN, etc., to provide secure communication between the (local) client and (remote) server. As shown in the picture below, the VPN (in red) is a virtual and secure tunnel laid on top of the physical channel (in black) across your LAN (or WAN) > local ISP > Internet > remote ISP.

After knowing VPNs could take Internet users anywhere, they were quickly embraced by the general public, as tools for identity protection and safe browsing across the Internet, unlocking geographically restricted content from streaming services, bypassing censorship, safe torrenting and more.

Now we know that a VPN creates a secured virtual network (without geographical restrictions) between you and the server. When you connect to this VPN server, you are using the VPN Server’s IP address (not the computer’s resources) to do whatever you are doing online, like torrenting, or web browsing.

With a VPN tunnel, you are fully private on your local network (LAN), going out of corporate networks (that don’t already use some kind of proxy), and best of all, your local ISP.

Nowadays, VPN service providers have large global networks with servers almost in every country. And within those countries, there are friendlier and stricter countries regarding data.

A seedbox refers to the “server,” which can be deployed on your premises or hired via a cloud-managed service. Seedboxes (Seed + Box) were initially designed as powerful BOX servers with the only purpose of SEED torrents.

While trying to share and download many torrents simultaneously, you would leave the seedbox on 24×7 with a client such as ruTorrent. The seedbox will do the hard work, and download torrents at high speeds.

What is common in a seedbox?

And the best part? With a VPS Seedbox provider such as Rapidseedbox, you can create your own VPN service.

Seedboxes are designed for torrenting. If you are creating your own, you’ll need to deploy your server on-premises or via a cloud-based service, and you’ll need to install everything. Having your own seedbox will give you flexibility and control, but you’ll also expend resources on maintenance, utilities, and paying for a virtual server (if you are hiring a cloud instance).

Seedbox services, on the other hand, provide everything you need. From a variety of torrent clients, torrent automation tools, VPN server/client, streaming services, sync and FTP sharing tools, and more.

Seedboxes are fully independent servers tailored for torrenting. So you could leave a seedbox 24×7 sharing/downloading, and it wouldn’t affect your local resources (bandwidth, data plan, CPU, memory, and even storage).

They work differently and were designed for different purposes.

VPNs were made to extend private networks virtually to remote places via public networks, like the Internet. To provide data privacy over these public networks, they use encryption. Your ISP will not be able to identify any port number, destination website, application, etc. Your traffic is fully encrypted.

Yes, you could use a VPN for torrenting, but remember to first check-in with them.

Seedboxes, on the other hand, are servers made for serious torrenters. You connect via secured methods and download torrents to your seedbox, your local resources are only used for remote connection and torrent management (so, you are literally out of privacy risks). The heavy torrenting burden is performed by the high-performance VPS seedbox.