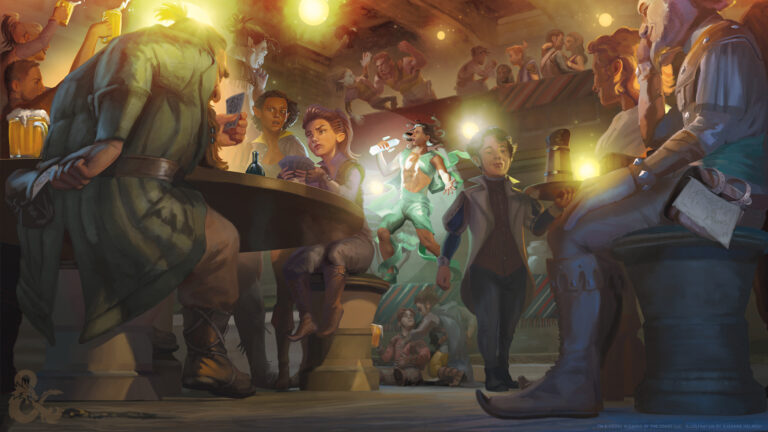 D&D is a tricky game. It allows players to be or do anything that they can think of in a fantasy world. The only limit is your own imagination.

Every D&D player starts out as a newbie at some point. It can be intimidating playing your first game especially when you start out playing with veterans.

So today, we’re going over some common and important questions that players may have that will help them fit right in at the gaming table on their first game.

New players are always intrigued by the idea of a game of D&D. They’ve only heard stories about the magical adventures that their friends go on late at night, behind closed doors. It can be hard to let other people in on the fun, because D&D groups typically become tight-knit, so outsiders only hear the odd story or two.

Sometimes, they don’t even know what exactly the game is. One group of players who I invited to their first game of D&D showed up and were confused when they didn’t see a box, board, or pieces. They thought it was an actual board game.

D&D is not a board game. It’s a tabletop Role-Playing Game (RPG). It’s similar to a board game but not quite. In its simplest form, a game of D&D consists of 1 Dungeon Master (DM) and any number of players. The DM creates a world and verbally tells players what’s happening, and the players react to the situation using characters that they’ve created.

There are player mats, minis, and other add-ons that players can buy or make to make the game more interactive, but in its purest form, D&D is an interactive story game that can just consist of dice and paper, where all the players are working together to make a fun story or adventure.

How do I make a good character?

One of the most enjoyable aspects of D&D is your character. It allows players to get creative and come up with interesting characters. Players can go in the direction of tried and true fantasy tropes or come up with something wacky and off the wall.

When creating your D&D character, you need to be on the same page as your DM. Some DMs may put restrictions on certain classes or playing styles. So, if you spend hours creating your perfect character, there’s a possibility that the DM may not allow it in the game. It would be a pain to spend hours making sure your character knows every one of the DnD Languages, only to have the DM not use them in the game. Read more about DnD Languages here: https://gamecows.com/dnd-languages-5e/.

The next fun thing to do is to come up with a backstory for your character. Are they a wandering swordsman looking for revenge? A wizard looking for the ultimate spell?

It’s entirely up to the player, but there is one caveat. Your backstory has to match your actual character level. It doesn’t make sense to write a 10-page backstory stating that your level one character is the world’s greatest fighter or wizard when they barely have any abilities.

You can create a 10-page backstory detailing how your character got into the adventuring lifestyle, but you have to keep in mind that they’re still a level-1 character.

Am I the main character?

Many players who know nothing about D&D or tabletop RPGs approach it like they would a video game or a board game. They want to win. The problem with that attitude is that it’s an open-ended story, so there is no winning or losing in the game.

These types of players also think that they’re immortal and nothing bad can happen to them. Since their friend is usually the DM, they think that there are no consequences to their character’s actions.

These types of players are often referred to as That Player. If you play D&D long enough, you’ll find one in your group. They don’t work well with the other player characters and can derail missions, thinking that only what they want is the most important thing.

To avoid being That Player, you have to keep in mind that D&D is a group game and it should be fun for everyone involved. Talk with your players outside of the game and with your DM to make sure that everyone is having fun. That’s the whole point of a game right?

Is D&D Only for Extroverts?

There’s a lot of speculation and wild theories that pop up before your first game of D&D. The myth that D&D was only for weirdos that lived in their parents’ basement has long since been debunked, but a different question has replaced it.

Is D&D for Introverts or Extroverts?

The answer is both. D&D is for everyone and my time as a DM has seen it played out in several different ways.

The few introverts who I’ve gotten to the table have flourished in D&D. People who I have known for years who were quiet at social gatherings fully embodied their character the second they hit the table. Roleplaying is a fantastic gaming style that lets people be someone else.

What is a Murder Hobo?

Murder Hobos are players that have a particular playing style.

For example, if players are given a scenario in which something is locked in a chest that the group needs, a DM will typically give several different ways to get around the door.

These are all actions normal players will take to get around the locked chest. A Murder Hobo, on the other hand, would typically cast Fireball on the chest and then be upset that the item inside was destroyed.

In a fantasy world where players are given incredible magical powers and abilities, it can be hard to show restraint. The D&D community calls these players Murder Hobos. In a game of players, this type can quickly derail a game.

Instead of acting like heroes or going along a standard campaign or mission, Murder Hobos have a tendency to run into any situation with guns blazing and blow up the world around them.

It’s not necessarily a bad thing, though. If the entire gaming group is on the same page and enjoys the chaos that Murder Hobos bring, it can be a fun diversion from normal and serious games.